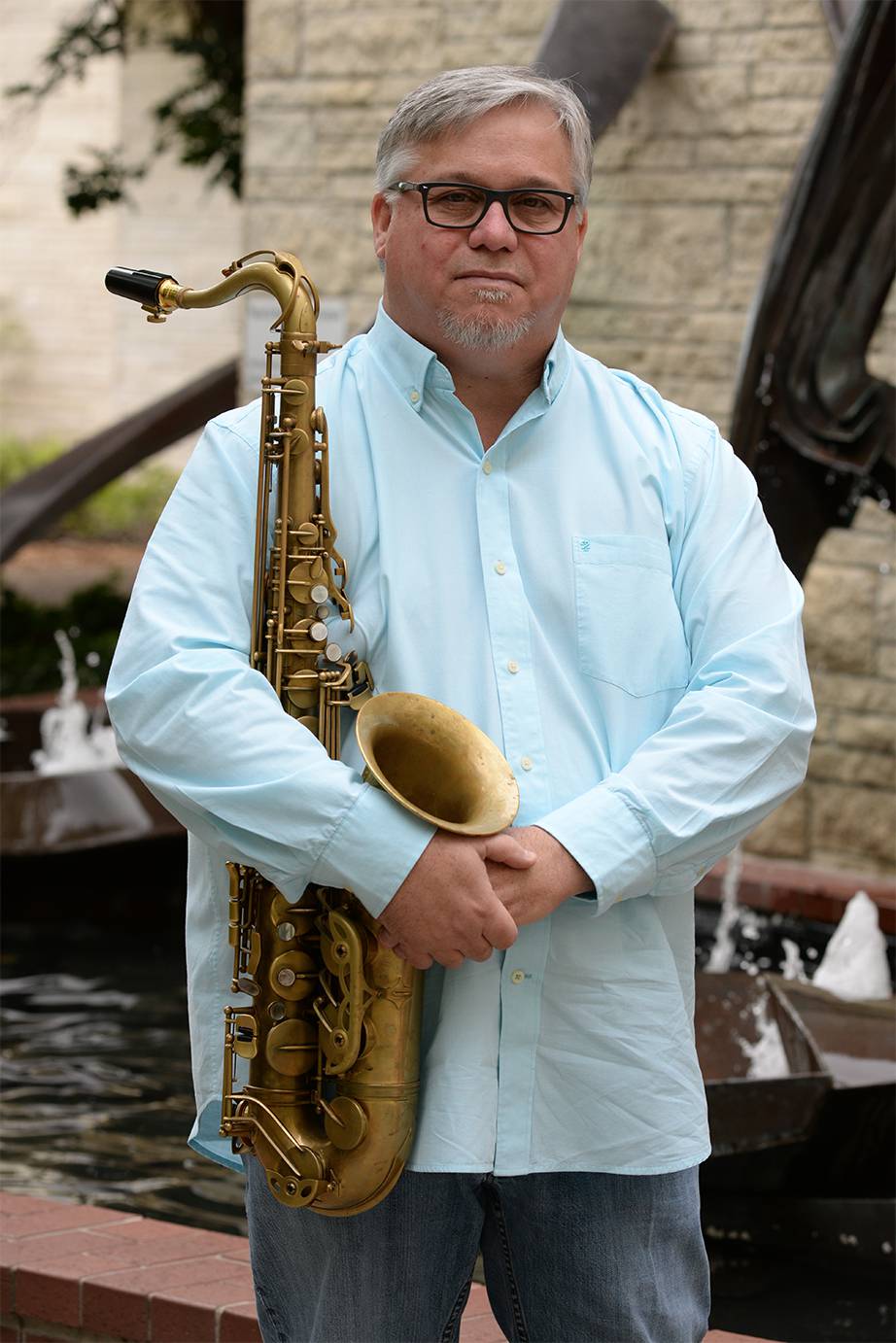 Dr. Treinen is currently Assistant Professor of Jazz Studies/Applied Saxophone at Washburn University in Topeka, Kansas. He received his PhD in Curriculum and Instruction with an emphasis in Jazz Studies under Dr. Wayne Goins from Kansas State University and his Masters Degree in Music Education from Kansas State University under Dr. Frank Tracz. Dr. Treinen is also a graduate of Washburn University where he received his Bachelors degrees in Music Education and Saxophone Performance. During the mid 80’s, Dr. Treinen occupied the lead Alto chair with one of the leading premier big bands in the country, The Kansas City Boulevard Big Band. In 1994, He was mentioned in Downbeat Magazine article for his solo work on the big band’s latest recording. The ensemble was recognized for its collection of highly talented musicians and recordings featuring Karin Allison, Kevin Mahogany, Bobby Watson, Pete Christlieb, Eric Marienthal and many others. Throughout his years in Kansas City, Dr. Treinen performed with several other local, regional and national big bands such as The Trilogy Big Band, Tony Dipardo Big Band, Topeka Jazz Workshop Big Band, Moms Big Band and The Jimmy Dorsey Big Band. In 1990, Dr. Treinen entered the United States Air Force as a Saxophone Specialist with The Heartland of America Band (formerly the USAF Strategic Air Command Band) stationed in Omaha, Nebraska. During his military career, Dr. Treinen was awarded the Air Force Commendation Medal for his solo work on the “Noteables” jazz ensemble recording Always and Forever, and for his performance work. He was then awarded Airman of the Year for the entire USAF music career field and received the Outstanding Airman Bandsman, 4 times from his unit commander during his tenure at Offutt, AFB. In 1996, Dr. Treinen was awarded the Air Force Achievement Medal for his accomplishments as musical director of the “Noteables” during The United States Air Force 50th Anniversary World War II Show, which was presented throughout the United States. Dr. Treinen currently serves on the Board of Directors for the Topeka Jazz Workshop Inc., as the Director of the education and scholarship committees and one year as the Artistic Director for The Coleman Hawkins Legacy Jazz Festival. He is currently in his tenth year as the Director of the Topeka Jazz Youth Jazz high school jazz program. Dr. Treinen is in high demand as a jazz educator and performer throughout the Midwest. He is currently serving as Kansas’s State Jazz Education Advisor for the Kansas Music Educator Association and is the Director of the KMEA Jazz Educators All-Star Big Band. As a clinician/ artist, Dr. Treinen has adjudicated and performed at numerous jazz festivals. As a jazz saxophonist, Dr. Treinen’s solo work can be heard on the following recordings: “Chronicles of Carmella,” by guitarist Dr. Wayne Goins, “Introducing Sean Parsons,” by pianist Dr. Sean Parsons and vocalist Kevin Mahogany’s CD “Big Band.” Throughout his career, Dr. Treinen has performed with such legendary performers such as Grant Stewart, Harry Allen, Bob Bowman, Todd Strait, Frank Mantooth, Donny McClaslin, George Duke, Mike Metheny, Roger Ingram, Carl Fontana, John Fedchock, Terrell Stafford, Bobby Watson, Wycliff Gordon, Eric Marienthal, The Temptations, and The Shirelles. Dr. Treinen is currently performing with the New Vintage Big Band in Kansas City, 9plus1, Michael Pagan Big Band, and The Wayne Goins Quartet. He continues to be an active performer and clinician providing clinics, workshops, and lectures on saxophone and jazz education throughout the United States. On March 7, 2015, Dr. Treinen was inducted into the Kansas Music Hall of Fame.